Drugged Driving – What You Should Know

In 2016, 44 percent of drivers in fatal car crashes (with known results) tested positive for drugs, according to the recent report entitled "Drug-Impaired Driving: Marijuana and Opioids Raise Critical Issues for States"by the Governors Highway Safety Association. This is up from 28 percent in 2006. See a graphic from the report below for more information about drugged driving and marijuana and opioids. 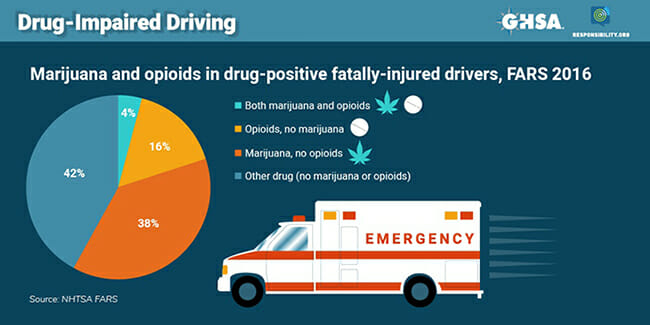 What is drug-impaired driving? Driving under the influence of over-the-counter medications, prescription drugs, marijuana, or illegal drugs.

Why is drug-impaired driving dangerous? Over-the-counter (OTC) medications and drugs affect the brain and can alter perception, mental processes, attention, balance, coordination, reaction time and other abilities required for safe driving. Even small amounts of some drugs can have a serious effect on driving ability.

What substances are used the most when driving? After alcohol, marijuana is the most commonly used drug. (Source: National Institute of Drug Abuse)

What happens when you use drugs and drive? Marijuana can decrease a person’s ability to drive a car. It slows reaction time, impairs a driver’s concentration and attention, and reduces hand-eye coordination. It is dangerous to drive after mixing alcohol and marijuana. Driving after using prescription drugs or over-the-counter medicine, such as cough suppressants, antihistamines, sleeping aids, and anti-anxiety medications may impair driving ability.

How many teens are smoking marijuana and driving? More than one in eight high school seniors admitted in a national survey to driving under the influence of marijuana in the two weeks prior to the survey (National Institute of Drug Abuse, 2012 Monitoring the Future Survey. )

Is it legal? Even in states that have legalized marijuana for recreational use, driving while under the influence of marijuana is still illegal. Unfortunately, too many people are misinformed. A study conducted by Liberty Mutual Insurance and Students Against Destructive Decisions (SADD) found that a third of all teens believe it is legal to drive under the influence of marijuana. In addition 27 percent of parents believed it was legal.

Not only is driving while high illegal, it's also very dangerous. According to the National Institute on Drug Abuse, the effects of marijuana can include: altered senses and sense of time, slow reaction time, anxiety, hallucinations and more.

FACT: More teens are driving after smoking marijuana than after heavy drinking. A national study showed that from 2009-2011, the percentage of high school seniors who drove after using marijuana was almost three times as high as those who drove after drinking heavily. (American Journal of Public Health 103:2027-2034)

Remember: Marijuana and many medications act on parts of the brain that can impair driving ability. Many prescription drugs have warning labels against the operation of machinery and driving motor vehicles, for a certain period of time after use. You are more likely to be injured or in an accident while driving while under the influence of marijuana or prescription drugs.

If you are interested in an event or promotional activity that focuses primarily on drugged driving, here are links to resources from the National Institute on Drug Abuse (NIDA) and others. Read more. 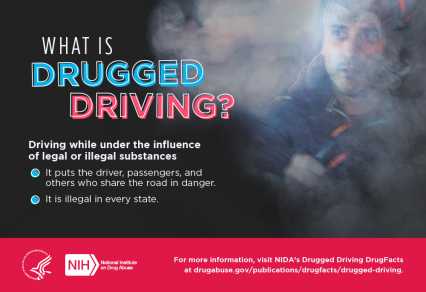 Panel 1
What is Drugged Driving? Driving while under the influence of legal or illegal substances. It puts the driver, passengers, and others who share the road in danger. It is illegal in every state. 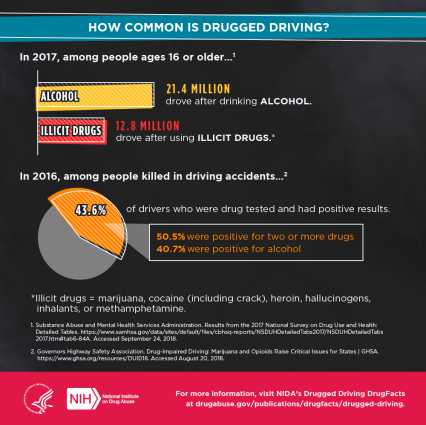 Panel 2
How Common is Drugged Driving? 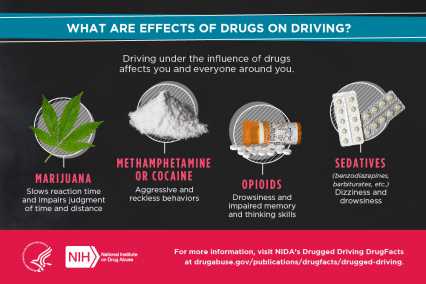 Panel 3
What are effects of Drugs on Driving? 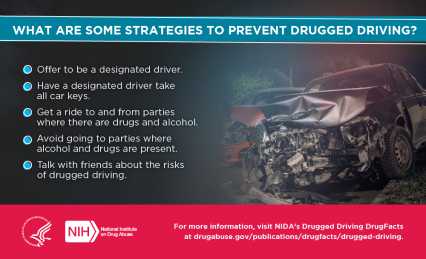 Panel 4
What are Some Strategies to Prevent Drugged Driving